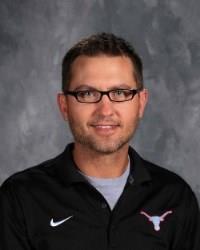 Chris Lorenz hails from the state of Nebraska where he earned a Bachelor’s Degree in Psychology from the University of Nebraska-Lincoln. After serving as a Chapter Consultant for his Greek Fraternity for two years, he eventually moved to Missouri in 2000, where he and his wife Dana wed in 2001. Chris followed his calling and left a corporate career to become a school counselor, earning a Master’s Degree in School Counseling from the University of Missouri-St. Louis. He is now in his 16th year at West High and 18th year as a school counselor, currently serving as the Counseling Department Co-Chair. During his time at West, he has co-sponsored and/or coached various activities, including Peer Teaching, Track and Field, and Football. Chris and Dana have two daughters: Sienna (15) and Emery (10). Sienna has joined her Dad at West High this year as a freshman, while Emery will be a future Longhorn as she completes her 5th-grade year at Claymont Elementary.