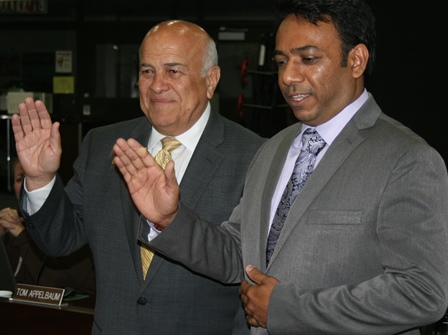 4/21/2016 -- Last night, Sam Sciortino (pictured left) and Sudhir Rathod (right) took the oath of office for the Parkway School Board. Sciortino was first elected to the board in 2010 and was reelected on April 5. This is the first term for Rathod, who was also elected in April. Sciortino and Rathod will serve a three year term.

Chris Jacob was elected board president and Sam Sciortino as vice president. This is the third time in the president role for Jacob.