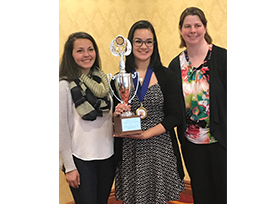 3/20/2017 -- At the Missouri State finals held in Jefferson City, Emily Bauer won the top honor of Missouri State Champion. Bauer is a senior at West High.

Bauer will now go to the National Finals in Washington, D.C. to compete at Lisner Auditorium at George Washington University with the other 52 state and territory champions. The event includes the welcome banquet, the three rounds of semi-finals on April 25, and the Congressional Breakfast and final round on April 26.

As a state champion, Bauer receives $200 and an all-expenses-paid trip to the finals for herself and an adult chaperone. Parkway West High School receives $500 for the purchase of poetry books.

Bauer takes to Washington the same three poems with which she earned the Missouri championship: It was not Death, for I stood up by Emily Dickinson, Entirely by Louis MacNeice, and Zacuanpapalotis by Brenda Cárdenas.

An estimated 6,000 students from 41 schools in Missouri participated at various levels of the competition.  Emily earned this through her dedication, practice, and poise.

The annual Poetry Out Loud National Recitation Contest encourages the nation’s high school students to experience great poetry through participating in a dynamic nationwide recitation competition. This program helps students master public speaking skills, build self-confidence, and learn about their literary heritage. Missouri has participated in Poetry Out Loud every year since the program was founded in 2006 by the Poetry Foundation and the National Endowment for the Arts (NEA).