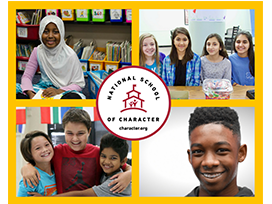 5/16/2017 -- Parkway has been named a 2017 National School District of Character! Only four schools districts in the country were honored with this recognition.

Each year, Character.org and its state affiliates select schools and districts that demonstrate a dedicated focus on character development programs and a positive impact on academic achievement, student behavior, school climate and their communities.

Through an in-depth and rigorous evaluation process, these schools and district were found to be exemplary models of character development. Criteria for selection are based on Character.org’s 11 Principles of Effective Character Education, a framework to assist schools in providing students with opportunities for moral action, fostering shared leadership and engaging families and communities as partners in the character-building effort.