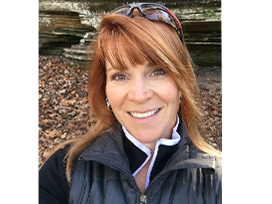 8/24/2017 -- Terri O’Leary, a teacher at Central High, was selected as the Missouri High School Physical Education Teacher of the Year by the Missouri Association for Health, Physical Education, Recreation, and Dance (MOAHPERD). She will receive the award during the MOAHPERD convention held at The Lodge of Four Seasons in Lake Ozark, Missouri on November 11.

In 2014 she completed the rigorous application and was awarded the National Board Certification.

In her 18th year of service to the Parkway School District, O’Leary exemplifies the criteria considered to earn this award. She has been actively involved in developing and implementing effective health education/promotion and physical education programs in the district. Further, she has provided service to MOAHPERD by presenting at many state conventions. In addition, she has consistently provided innovative teaching and assistance in special projects to her students and school, often involving students in health promotion projects.

In the spring of 2017 O’Leary was the recipient of the Ambassador Award from the Special School District of St. Louis County.