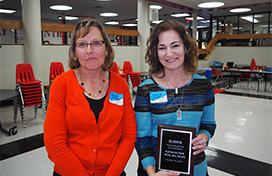 Park has been a leader in the development of safe practices for schools in taking care of students with diabetes. In obtaining her master’s in public health/school health from the University of Missouri, she focused her studies on developing a toolkit to train unlicensed personnel on the care of students with type 1 diabetes. As a result of this toolkit, countless school nurses and unlicensed school staff have been educated in Parkway Schools, the St. Louis Suburban area and throughout Missouri.

Park has presented her toolkit many times throughout the state, including:

Parkway School District Board of Education, 2009 and 2013