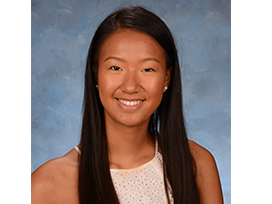 Wang, a senior, has not decided where she will attend university, but plans to study economics or business with a possible math focus. Depending on where she attends college, she wants to pursue another major or a minor related to history or cultural anthropology. After university, she wants to go into business consulting. Outside of the classroom, Wang plays tennis and dances.

Wang took the ACT in April when it was provided by Parkway at no cost.

Nationally, while the actual number of students earning the top score varies from year to year, on average, less than one-tenth of one percent of students who take the ACT earn a top score. In the U.S. high school graduating class of 2016, only 2,235 out of nearly 2.1 million graduates who took the ACT earned a composite score of 36.