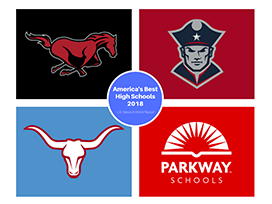 Central, South and West high schools received a silver medal on the annual list of America's Best High Schools, placing among the top 25 high schools in Missouri. Only 29 out of 517 Missouri high schools made the list of gold or silver medal status. To see the full list for Missouri, click here.

Part of the ranking process looks at how well a school is preparing students for college and careers. The U.S. News rankings include data on more than 22,000 public schools in 50 states and the District of Columbia. Schools were awarded gold, silver or bronze medals based on their performance on state assessments and how well they prepare students for college.