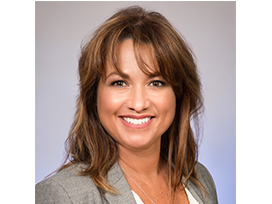 2/1/2019 -- Gina Piccinni has been named principal of Pierremont Elementary School, effective July 1. The board of education voted in support of the recommendation at its meeting Monday night.

Piccinni is a very familiar face in Parkway. Currently, she serves as the assistant superintendent of student services. Since she began this role in 2017, she has led the student services team, resulting in additional supports around social-emotional needs, additional elementary staffing to support behavioral specialists and the continued advancement of our character education work.

Previously, Piccinni served as principal of Carman Trails Elementary in Parkway for five years. Piccinni’s passion and talents as a building principal are still widely recognized in Parkway. As we were thinking about the qualities needed for next leader of Pierremont, at the same time, Piccinni expressed a desire to be considered as the next leader for Pierremont.

Before coming to Parkway, Piccinni was the coordinator of English language learning for the City of St. Charles School District and the principal of Null Elementary School. Prior to that, she was the director of research, evaluation and technology in Uvalde, Texas and was a principal and teacher in other Texas school districts.