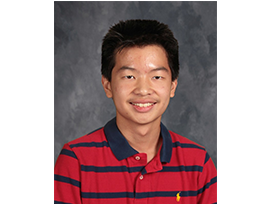 2/7/2019 -- Congratulations to Wilson Gao, a West Middle eighth-grader, for getting a perfect score on the ACT test! Gao scored a 36 -- the highest possible score -- on the ACT college admissions and placement exam. Normally, the ACT is not taken until a student is junior in high school.

The ACT consists of tests in English, mathematics, reading and science, each scored on a scale of 1–36. A student's composite score is the average of the four test scores. The score for ACT’s optional writing test is reported separately and is not included within the ACT composite score.

Watch a story on KSDK, Channel 5 here and read about Gao in this recent Post-Dispatch story.