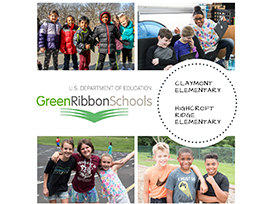 Parkway received two of only four awards given to schools in Missouri from the U.S. Department of Education. Parkway now has six National Green Ribbon Schools - Bellerive and Green Trails elementary schools were awarded in 2018. Additionally, McKelvey Elementary and North High were named Green Ribbon Schools in 2017. This accomplishment exemplifies the collaborative efforts and leadership role the district has taken to make an impact in not only the state but the nation.

Across the country, 35 schools, 14 districts, and four postsecondary institutions were honored for their efforts to address the three “Pillars” of the program: reducing environmental impact and utility costs, improving health and wellness, and ensuring effective sustainability education. Learn more about the award here.