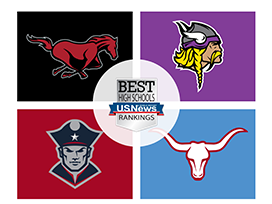 In coordination with North Carolina-based RTI International, a global nonprofit social science research firm, U.S. News ranked 17,245 public high schools out of more than 23,000 reviewed. This is the count of public high schools that had a 12th-grade enrollment of 15 or greater, or otherwise had sufficient enrollment in other high school grades during the 2016-2017 school year to be analyzed. It is six to seven times larger than the more than 2,700 ranked schools in the 2018 edition.