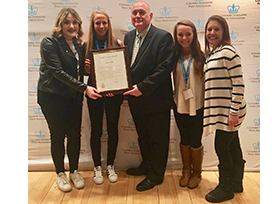 4/4/2017 -- The West High School yearbook staff won the Gold Crown award by Columbia Scholastic Press Association (CSPA). The yearbook, the Paweshi, was one of only two hybrid yearbooks in the country to win this award, which is the CSPA's highest honor.

The students received the award March 17 in New York City at the Columbia Scholastic Press Association (CSPA) Convention at Columbia University. This year, 1,100 newspapers, magazines, yearbooks and digital publications issued during the 2015-2016 academic were eligible for judging in the 2017 Crown Awards program.

Parkway West High School was one of four schools honored in the country for their hybrid yearbook and one of two in the country to win the highest award possible, the Gold Crown. This was a first for the yearbook staff.

West High Yearbook Advisor, Debra Klevens said, “Spending spring break with the yearbook leadership team was incredible. I am so happy that Parkway West is making headlines across the country for the history documenting we are doing. I look forward to watching these students continue the legacy of journalism and paying it forward with future students.”

While in New York City, Klevens arranged for hands on experiential learning for the students with the executive editor of The Knot (2002 Pawesehi alumni), American Express public relations department (2002 Pawesehi alumni and 2006 Pathfinder alumni), met with the producer of MSNBC and the beauty editor of Glamor Magazine. The students learned so much and were told to reach out in the future for internships.